Our Faithful God in Times of Questioning

COVID-19 has impacted almost every corner of the world since the beginning of 2020. As countries race to develop a cure for the virus, we all are faced with difficulties and questions for the future. How can we live in godly peace when confronted with the fear of sickness and death every day? How will we provide for our families if we lose our jobs or the economy shuts down due to the virus?

This has been reality for many of the church leaders and communities that our teams work among. Thanks to your generous support, Rhema has been able to continue our relief efforts in and around our communities, distributing food and basic necessities to pastors and community members who have been hit the hardest. Let us share below a testimony from one such pastor that is encouragement in these trying times: 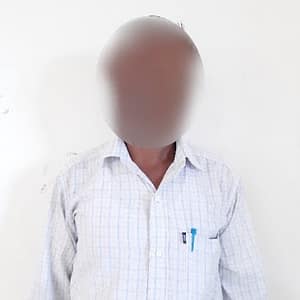 “My name is Akeen. I minister in a church of 60 believers in my village. In 1999 my son was affected with a serious disease, indeed, he was in a fatal condition.

At that time a pastor came to us whom we had not ever seen before, and said, ‘If you believe then He will heal your son.’ Then I said, ‘If He heals my son, then we all will believe in Jesus Christ.’ Then he prayed and my son got well from his diseases. We all accepted Christ as our personal savior and took baptism.

Then I started working for the expansion of God’s glory and kingdom. In February 2020, all South Asia was affected with serious pestilence, all South Asia was shut down, mass gathering was not permitted. In that time God provided us rice bags through Rhema.”

*names, faces, and exact locations may be changed for security purposes

Two events, two decades apart, and yet the same God in each of them. The same God who healed is the same God who provided. And we can look to that same God in times of fear and questioning. But what do we do when we do not see God’s healing and provision? Do Christians have an answer when fear and death linger for seasons of our lives; what happens when Romans 8:28 sounds like words of biting satire instead of warm comfort?

Have we failed? Do we not have enough faith? Or do we even dare to say the thought that lurks behind the darkness of our minds:

Where is God when Everything Goes Wrong: A look into the Life of Paul

Do your best to come to me soon. For Demas, in love with this present world, has deserted me and gone to Thessalonica. Crescens has gone to Galatia, Titus to Dalmatia. Luke alone is with me. (2 Tim 4:9-11)

When you come, bring the cloak that I left with Carpus at Troas, also the books, and above all the parchments. (2 Tim 4:13)

Alexander the coppersmith did me great harm; the Lord will repay him according to his deeds. Beware of him yourself, for he strongly opposed our message. At my first defense no one came to stand by me, but all deserted me. (2 Tim 4:14-16)

For I am already being poured out as a drink offering, and the time of my departure has come. (2 Tim 4:6)

These words were written by Paul as he sat as a prisoner in Rome. As he reflected on social isolation, difficulties in supplying his basic needs, the sickness of a beloved friend, and the ever-growing shadow of death, we can only imagine the questions that passed through his mind.

Did Paul look back on times of sweet fellowship in Antioch, times of prayer, shared joys, shared tears, and wonder at his present state? Where is the unity and fellowship of the believers that was once so real?

Did he struggle with “the secret of being content” (Phil 4:11-13) as he asked for someone just to bring him some warm clothes before the winter sets in?

And finally, the great shade over all this conversation, Paul’s approaching death. Paul wrote elsewhere that his “desire was to depart and to be with Christ” (Phil 1:23), but do these sound like the words of a man who is eager to see his death with joy? Do we not rather detect tinges of sadness and a longing to see his loved ones before his departure?

The End of the Road

No doubt many of us have asked similar questions in these past months.  Maybe the questions all boil down to one big cry from the depths of our souls,

Where are you God?

When Paul was wronged and all his friends deserted him, he seemed to find his answer,

The Lord stood by me

so that through me

So I was rescued from the lion’s mouth.

The Lord will rescue me from every evil deed

and bring me safely into his heavenly kingdom.

To him be the glory forever and ever. Amen.

Where was God? He was right there, standing with Paul, in the middle of all the pain and isolation. And Paul believed that this same God would continue to be with Him, even through death, and would carry him into the Heavenly Kingdom.

We know and believe God is our provider, He is our healer. We also know that believers still get sick. We still struggle to get our daily needs met. We die. Be we need not think these things happen due to any failure on our part or God’s. In fact, Jesus promised that our lives would be filled with troubles (John 16:33).

So, in this time when all the world is facing very real and present troubles, let us know that we have a real Hope. That we have a God who is with us. And let us take comfort in Him.

Until all the world knows.

Rhema for the Nations

Scripture quotations are from the ESV Bible.

“Overflowing in Many Thanksgivings to God”

When God Heals the Wife of a Persecutor of the Church

Let’s stay in touch! Enter your email to receive updates, prayer requests, and testimonies from our teams!